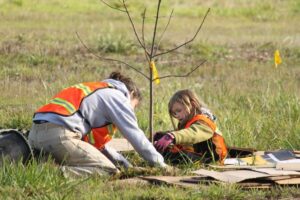 Friends of Trees strives to plant and care for trees in a way that is equitable and inclusive. For Friends of Trees Eugene that means updating our processes and working with our partners to reach parts of town that are underserved and more diverse.

In the past, as Eugene Tree Foundation, plantings focused in the downtown core and in south Eugene where volunteers lived. When we became Friends of Trees in 2009, we immediately expanded our service area to Springfield and underserved parts of Eugene, beginning with three 2010 plantings in Trainsong, a historically underserved neighborhood.

In the past, trees weren’t necessarily planted where they were needed most – in underserved neighborhoods. In recent years the process was improved to include an equity lens in order to diversify planting locations, and as a result West Eugene, which is more diverse and historically underserved than other neighborhoods, has become a priority location for new street trees in Eugene. We also prioritize planting trees in Springfield, which, like West Eugene, is more diverse and historically underserved.

Friends of Trees Eugene’s Pruning Program also strives to deliver valuable tree care services in an equitable fashion, again, prioritizing West Eugene until it’s “caught up” in terms of trees pruned. We prune 250-300 trees every season, thanks to our City of Eugene partnership (which funds pruning for 200 trees) and community support from donors such as Sperry Tree Care–and thanks to the trained community pruners who volunteer to provide critical care to young trees.

Friends of Trees has partnered with the City of Eugene on pruning programs for nearly 30 years; in the summer of 2020 we began choosing our sites through an equity filter, with a much greater focus on work in west Eugene. We’re hopeful about the City of Eugene’s ability to invest further in community-based pruning, toward meeting our goal of pruning every tree we plant at least once, ideally twice. FOTE intends to build our community tree care program to do more good work in Eugene and Springfield’s underserved neighborhoods.

Interested in supporting tree planting and tree care in Eugene and Springfield? Look for volunteer opportunities here, and donate to Friends of Trees Eugene here – all donations from addresses in Lane County support our local office here. Thank you!

Photo: One of our first planting events in the Trainsong neighborhood, 2010.

END_OF_DOCUMENT_TOKEN_TO_BE_REPLACED

Get to know Adrián + Project Zero

END_OF_DOCUMENT_TOKEN_TO_BE_REPLACED

Meet The Blueprint Foundation “I like the feeling of getting my hands dirty because I feel like I did something. It’s a good

END_OF_DOCUMENT_TOKEN_TO_BE_REPLACED

Did you know that the new growth on the 😍 pnw n

We’re so excited to share that we’re hiring fo

Huge thanks to all you 🌳 🌟’s who have help

We were delighted to meet this 😍 Pacific Treefr

Huge kudos to you 🌳 🌟 volunteers that joined