The Greening of Vancouver 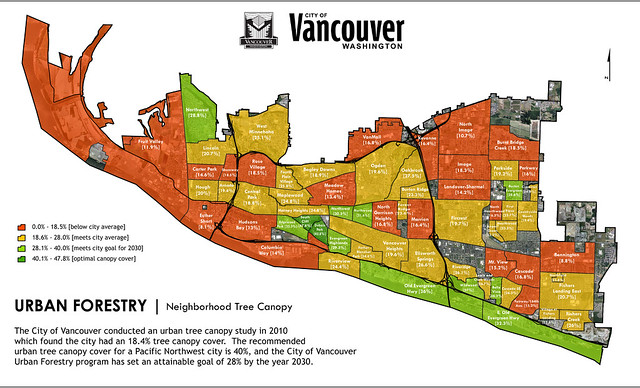 Friends of Trees‘ partnership with Vancouver began informally in 2001, when two trees were planted in Edgewood Park. Over the years, especially since 2003, the number of trees planted each year has increased. In February, Friends of Trees and Vancouver Urban Forestry set three records at the biggest neighborhood tree planting to date in the city. During the season, Friends of Trees planted 447 trees in Vancouver—more than in any previous season. 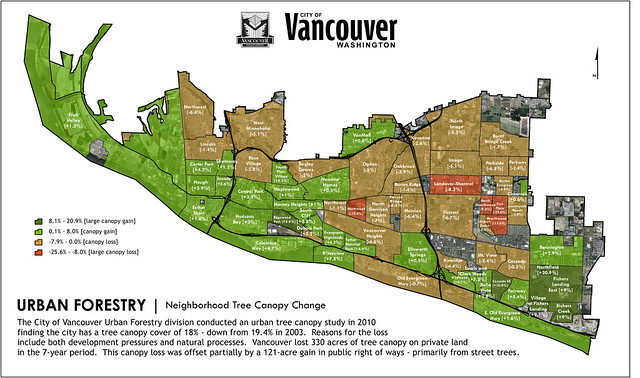 In this map showing urban tree canopy change in Vancouver between 2003 and 2010, Ian notes the following: “The City of Vancouver Urban Forestry division conducted an urban tree canopy study in 2010 finding the city has a tree canopy cover of 18% – down from 19.4% in 2003. Reasons for the loss include both development pressures and natural processes. Vancouver lost 330 acres of tree canopy on private land in the seven-year period. This canopy loss was offset partially by a 121-acre gain in public rights of way, primarily from street trees.” These street trees were planted by Friends of Trees in partnership with the City of Vancouver Urban Forestry division.

Clearly there’s more work to be done, but progress has been made where citizens join community tree plantings to add trees to their neighborhoods. Vancouver schedules four plantings with Friends of Trees each year, and Charles Ray, Vancouver’s urban forester, anticipates 450 new trees each year over the next five years. Friends of Trees looks forward to setting more records during the 2013-14 season.

Simple ways to protect your tree on windy days

The Pacific Northwest is experiencing a historic windstorm event in September, 2020. These winds can cause serious damage to both young and

END_OF_DOCUMENT_TOKEN_TO_BE_REPLACED

Tree walks & tree talks for you

It’s the 50th anniversary of Earth Day this year. Friends of Trees was planning to celebrate in our usual fashion: Planting trees. Together. But,

END_OF_DOCUMENT_TOKEN_TO_BE_REPLACED

In honor of Earth Day’s 50th anniversary Friends of Trees is hosting a virtual, day-long celebration on our social media channels –