The Lifesaving Potential of Trees 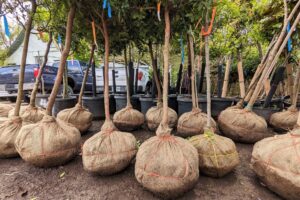 At Friends of Trees, we champion the many benefits of urban trees: they clean the air and water, provide wildlife habitat, and shade our homes and streets. Trees improve our environment, but they also improve our quality of life. Dr. Geoffrey Donovan, a researcher with the United States Forest Service, wanted to investigate one step further — do trees save lives?

In 2013, Donovan conducted a study that associated a loss of trees from emerald ash borer with a higher rate of mortality for people that lived in those places that lost trees.

“I wanted to see if the inverse was true,” Donovan says. “Would planting more trees be associated with fewer deaths?” 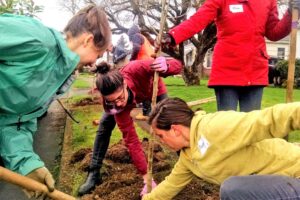 The new study, published in December 2022 in the journal Environmental International, found that each tree planted was associated with significant reductions in non-accidental and cardiovascular mortality. To account for other possible explanations for the mortality rate like race, education, and income, the statistical models incorporated data from the American Community Survey.

Looking at all 140 census tracts in Portland, Donovan showed that on average, 11.7 new trees in each neighborhood were associated with 15.6 fewer non-accidental deaths and five fewer cardiovascular deaths each year.

“The association is unequivocal, but the study has its limitations,” Donovan says. The study stops short of proving a definitive causal relationship between planting trees and fewer deaths, but Donovan expressed confidence in his findings, saying, “we do think it’s likely that trees are saving lives in Portland, because we accounted for a lot of other explanations.”

One way the study was able to account for other explanations was by focusing on the change in trees compared to the change in mortality rate. The totality of canopy can vary widely by neighborhood, but each new tree can make a difference regardless of where it’s planted.

The study went on to associate the reduced death rate with an incredible economic benefit, based on the EPA’s statistical value of a human life. Planting one tree in each of the 140 census tracts in Portland is associated with a reduction in non-accidental death of 1.33, which has a statistical value of $14.2 million. To plant and care for those 140 trees would cost just $3,000-$13,000.

“In short, trees are cheap and human lives are valuable,” Donovan says. “The public money that went to Friends of Trees generated remarkable rates of return.” 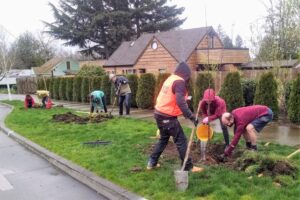 The City of Portland’s Bureau of Environmental Services did not renew its partnership with Friends of Trees that added 40,000 street and yard trees in Portland over 14 years. Friends of Trees is still planting in Northeast Portland as part of the Clean Air Canopy project, and in 17 municipalities throughout Western Oregon and Southwest Washington.

“Beyond the incredible findings, this study points to the importance of robust data collection,” Yashar says. “By diligently tracking this information, we are creating huge data sets that scientists can use in their research. And then that research can help us do our work better.” Friends of Trees logs the location, species, and planting date of every tree it plants.

“Friends of Trees data has been enormously helpful to me,” Donovan says. “I would love to see even closer collaboration between practitioners and scientists.”

NE Portland neighborhoods come together to plant for environmental justice Earlier this month, 110 volunteers gathered in the Cully neighborhood

END_OF_DOCUMENT_TOKEN_TO_BE_REPLACED

Collaboratively connecting a community to their natural resources In April, residents of the Wilkes community got to celebrate nature in their

END_OF_DOCUMENT_TOKEN_TO_BE_REPLACED

An update on our Robert Wood Johnson Foundation partnership

Engaging Community to Take Climate Action We know that trees fight climate change. And here at Friends of Trees our experience partnering with