Our Favorite Trees to Watch in Winter

Many trees have shed their leaves and are on their way to being dormant for the winter. But not all of them! Late fall and winter in Oregon and Washington is still a wonderful time to admire trees. Our Eugene team put together some of their favorites to watch out for this time of year.

One of the most brilliant fall trees is the gingko, whose intense yellow leaves tend to fall all at once, thanks to their unique stems. Although ginkgos have “broad” leaves, they are actually more closely related to conifers. The modern ginkgo has changed little since its ancestors first graced the planet more than 200 million years ago—tens of millions of years before the advent of conifers and more than a hundred million years before broad-leafed trees became abundant. 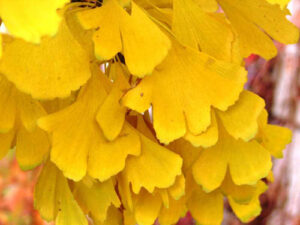 For many the Douglas-fir, Oregon’s state tree, is a quintessential evergreen conifer, especially as many of them head into our living rooms for the holidays. Douglas-fir dominates local woodlands, and is joined sometimes by valley ponderosa pine, incense-cedar, and grand fir.

Conifers like the Doug-fir are perfectly adapted to our area’s wet winters and dry summers. Part of what makes Eugene special is that while the urban forest is composed largely of broad-leafed deciduous trees, it’s punctuated with firs, incense-cedars, giant sequoias and other conifers. 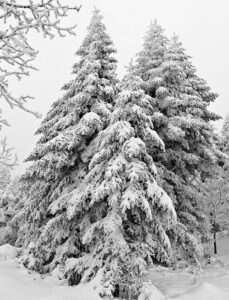 One of the many reasons we love evergreen conifers—they work year-round, producing oxygen and storing up carbon through photosynthesis, and providing important stormwater benefits by intercepting precipitation in their dense canopies.

Another favorite? The Atlas cedar, one of our true cedars. You can tell the cones of true cedars, like the atlas cedar, because they stick up vertically and shed their bracts one by one while staying attached to the tree.

The Atlas cedar notable is this time of year because it’s already releasing its pollen. Many conifers, in particular, “bloom” during late fall and winter. Atlas cedars (Cedrus atlantica) have exceptionally large and showy pollen cones, sometimes two to three inches in length and up to half an inch in diameter. The spent pollen cones are most noticeable after they have fallen, when they carpet the ground beneath the tree with what look like big, fuzzy, yellow caterpillars. 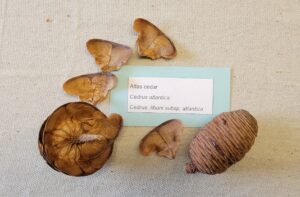 Keep in mind, wind pollinated trees are responsible for allergies, rather than showy flowers. Trees like the incense cedar will be putting out pollen in December. But the rain might save us—heavy rain will knock the particulates out of the air, cleaning them up for us.

Many people have the impression that, during the winter, trees—especially broad-leafed deciduous ones—are completely dormant. But thanks to relatively mild winters in western Oregon, it’s possible to find at least one species of broad-leafed tree—and sometimes several or more—in bloom during any given month of winter. In December, the long, dangling, pollen-bearing catkins of European filberts begin to develop—and the tiny, magenta female flowers do, too, though they’re not nearly as conspicuous. And in January, we begin to see the first elm flowers. Keep your eye out for these lovely signs of life!