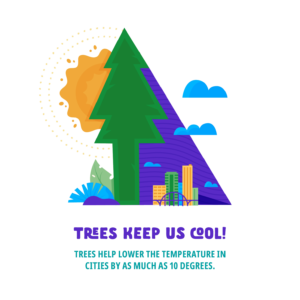 “At a time when climate change is making heat waves more frequent and more severe, trees are stationary superheroes. Research shows that heat already kills more people in the United States than hurricanes, tornadoes and other weather-events, perhaps contributing to 12,000 deaths per year. Extreme heat this week in the Pacific Northwest and Canada has killed hundreds.

END_OF_DOCUMENT_TOKEN_TO_BE_REPLACED

Trees are without a doubt the best carbon capture technology in the world. “When they perform photosynthesis, they pull carbon dioxide out

END_OF_DOCUMENT_TOKEN_TO_BE_REPLACED

Trees Give Us Oxygen

END_OF_DOCUMENT_TOKEN_TO_BE_REPLACED

Addressing heat concerns in our community In June 2021, the Pacific Northwest was embroiled in a heat dome effect, reaching high temperature