Leaflet: Prepare Your Trees For Winter 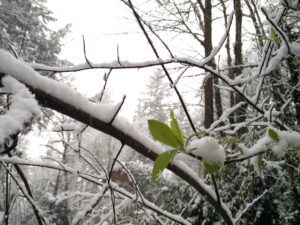 The temperatures have dropped, and it’s probably just a matter of time before we get some serious winter weather. The best thing we can be doing this time of year to make our trees more storm resilient is pruning. We’re going to walk you through the pruning techniques that will help a tree if and when we get another serious winter storm.

As we’ve seen more and more in recent winters, the combination of wind and ice will lead to branch failure—in short, nature prunes itself. That’s exactly why it’s best to prune problem areas now rather than waiting until snow and ice is predicted. Ice can increase the weight load on a branch by up to 30 times.

For an even more in-depth guide to pruning, visit our pruning page. 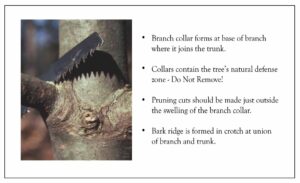 Remove the Ds. The best way to start is to look for branches that are dead, diseased, dying, or decaying— anything that starts with a D. Just take a nice pruning saw or or some hand pruners and prune that right out of the tree.

A small six- or seven-inch folding saw is really all that a homeowner needs. We could do 99% of what we end up doing with just hand pruners and a folding saw on a young tree.

Mind your pruning budget. You shouldn’t prune away more than 25% of your tree’s canopy. Leaves are effectively solar panels that produce energy for the tree, and you don’t want to remove too much of that. Sometimes people want to prune their trees to encourage it to grow taller, and they’ll prune all the lower branches and make a sort of lollipop. So another part of calculation is that two-thirds of the trunk needs to have lateral branches.

Look for included bark. A wide angle between a lateral branch and the trunk creates better architecture than a sharper angle. When the angle is more acute, the bark will start to fold over itself in the crease at the connection point. This is called included bark. Branches with included bark are where more than 80% of failures happen. 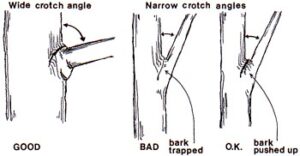 There might be instances where pruning all the branches with included bark will take you beyond your pruning budget, in trees like Japanese maples, zelkova trees, or columnar (upright) cultivated varieties. There are ways to address included branches without removing them entirely. You can cut away the most vigorous upright branches along the branch, which will stop that branch from growing more. There is a gravity-fed hormone in upright branches that encourages growth. By removing the upright branches, you change the hormones to those for repair and reproduction and in doing so, slow the growth of the branch relative to the trunk.

Encourage a strong central trunk. We’re trying to prune trees to have a strong central trunk—or central leader. Some trees, like conifers, grow a central trunk naturally. Other trees want to have a more rounded canopy. We want to create a strong backbone so that a tree is more resilient to wind. It is a bit unnatural, but when we are planting trees in the built environment, we have safety considerations to keep in mind. If a tree is in the middle of a giant backyard, it can take a more natural shape, but if it’s somewhere where its branches could fall on a house or a car, it’s helpful to have that strong central trunk.

When you prune, look for a strong central leader on a young tree that can be encouraged as it matures, and prune away competitive side branches. The rule of thumb is that you don’t want to have any lateral branches that are more than half the diameter of the central leader. By keeping those side branches smaller, if they fail, it’s less likely to be catastrophic to the tree or its surroundings.

If a storm comes!

When a winter storm does arrive, what do you do?  Shake off snow, but not ice. Light snow can be gently shaken from branches with a broom moved in an upward motion. Heavier snow and ice should be allowed to completely melt  because branches with ice especially often fail when shaken.

Once the snow is gone, inspect your tree for damage, taking care to take safety precautions as necessary. You can use a pruning saw to cut away any dead or damaged branches at the nearest branch collar.

Leaflet: It’s Time To Put Down Some Roots

Last month, we told you why you should leave the leaves. We got such great feedback that we decided to create a regular tree care column,

END_OF_DOCUMENT_TOKEN_TO_BE_REPLACED

Leave the leaves! Fall brings cooler days and evenings, an extra layer when we head out, and the striking colors on display gifted to us by

END_OF_DOCUMENT_TOKEN_TO_BE_REPLACED

It’s hot out there! In our service area and around the world we are experiencing unprecedented weather events as a result of climate

END_OF_DOCUMENT_TOKEN_TO_BE_REPLACED

It’s getting dry & warm out there …

END_OF_DOCUMENT_TOKEN_TO_BE_REPLACED

The type of shade we like to throw! Plant now for

Hey Gresham folks! Do you want more trees in your

It's Saturday! Which means we are planting, of cou

Yesterday, we partnered with @depavepdx on a plant

From the edge of the Columbia Gorge to the farmlan

"Without all of you, we’re just a pile of trees

Wow, what a weekend ahead! We have events tomorrow

Our volunteers are awesome! We have a bunch of gre

It's not just what we plant, it's where. We want t

What a great start to the year! Huge thanks to all

After we plant a tree, we don't just wash our hand

We have been awed by the generosity in support of

It's a new year, but we are smack in the middle of

Happy New Year! We want to start 2022 by thanking

Thank you for standing with us in 2021. If you wan

It's the last @giveguide Big Give Day of the year!

Hey Salem folks! Want to start the New Year by get