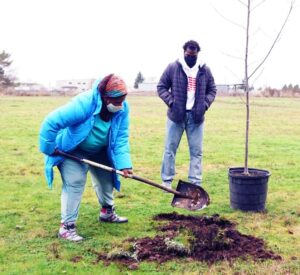 Mattie Reynolds Park was the perfect site for our MLK Day of Service.

Along with 17 new trees, a new park in the City of Eugene has great historical significance. Mattie Reynolds Park, the site of our January 18th Martin Luther King Jr Day of Service, honors one of Eugene’s founding Black families, Sam and Mattie Reynolds. The Reynolds’ fight for civil rights was one of their many important contributions to Eugene and the surrounding area, and adding trees to the park that bears their name seems a fitting MLK Day event.

Friends of Trees Eugene, and the City of Eugene, with sponsorship support from Mountain Rose Herbs, hosted the community tree planting event that added the new trees to Mattie Reynolds Park, along with planting 31 trees in surrounding neighborhoods.

The day’s featured speaker was Pastor Deleesa Meashintubby from St. Mark CME Church, the oldest African American church in Eugene. Also in attendance, along with many community volunteers, were Sam and Mattie Reynolds’ daughter and granddaughter. We’re honored to have played even a small role in helping establish this important tribute to the Reynolds family.

Look for Eugene volunteer opportunities here, and donate to Friends of Trees Eugene here – all donations from addresses in Lane County support FOTE. Thank you!

The Power of Partnerships

CONNECTING YOUTH TO NATURE, JOB TRAINING FOR THE ENVIRONMENT: JUST A COUPLE OF ELEMENTS OF SOME AMAZING PARTNERSHIPS What started as a group of

END_OF_DOCUMENT_TOKEN_TO_BE_REPLACED

Meet The Blueprint Foundation “I like the feeling of getting my hands dirty because I feel like I did something. It’s a good

END_OF_DOCUMENT_TOKEN_TO_BE_REPLACED

Thank you! And happy new year.

To all of our supporters, THANK YOU. Your support in 2020 meant that, despite unimaginable obstacles, we were still able to plant trees +

END_OF_DOCUMENT_TOKEN_TO_BE_REPLACED

Reflecting on 2020: the year of the pivot

More like multiple pivots, really. Just like trees though, flexibility to bend and not break in the storm is how we modeled ourselves this

END_OF_DOCUMENT_TOKEN_TO_BE_REPLACED

We had such a wonderful time celebrating #OregonAr

Tree walk & talk in the Jade District with APANO.

The killing of Duante Wright by Minnesota police i

It's #drawabirdday ! Thx @usfws for the heads up a

Have you walked under a blossoming cherry tree thi

Friends of Trees: Power in Partnerships. In celebr

Huge thank you to our longtime friends and partner

Welcome to Earth Month with the Tree Team!. Join o

We truly cannot get enough of the Magnolia blooms

We recently received a 💖 note from a community

Friends of Trees is devastated and outraged by yet

Trees are on the move! Our 🌳 ⭐️ staff are

Did you know our urban forest removes nearly 55 mi

Live from the Columbia Slough Natural Area. The tr

Good morning! We will be LIVE around 11am this mor

A beautiful day for a tree pickup from our friends