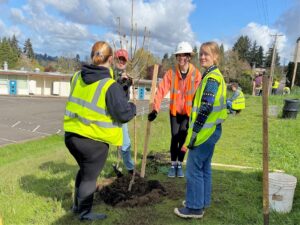 When you think of an elementary school campus, you probably think of sports fields and playgrounds. And you probably imagine trees—trees for kids to sit in the shade, or hide behind during a game of hide-and-seek, or to collect leaves from for their science classes. But a recent survey in Eugene found that the industrial areas of the city may actually have more canopy than the schools.

To help add trees at our communities’ schools, Friends of Trees did a planting at Charlemagne Elementary School in Southeast Eugene this year. The Eugene team was able to plant 32 street trees in the school’s right-of-way along Potter Street on the east side of the school’s campus. This right-of-way sees a lot of foot traffic from students. Studies show that cars drive more slowly on streets with more trees.

“We’d been hearing that students wanted trees at their school,” says Volunteer & Program Specialist Taylor Glass. “So we scouted out tree locations. The huge right-of-way had a ton of space for us to plant a whole bunch of large trees.”

The wide right-of-way allowed the team to plant trees that will grow into large shade trees, like Ponderosa Pine, Bald Cypress, Oregon White Oak, and Chinkapin Oak. The team made sure to have a mixture of both native and drought tolerant trees, so that the trees will survive and have a lasting impact on the campus. A volunteer from the neighborhood has committed to watering the trees during the first three years, while they get established.

“This has been one of our largest planting efforts at a school,” says Taylor. “We hope to be able to do more, both on the school grounds here and at other schools that could use more trees.”

END_OF_DOCUMENT_TOKEN_TO_BE_REPLACED

We had another great tree walk and talk as part of

We're still basking in the awesomeness of this pas

We are still accepting applications to our Deputy

We're still looking for Crew Leaders for the upcom

It's a great day for trees in Vancouver—it's Giv

Give your trees a drink tonight! It's about to be

We had an awesome Tree Walk & Talk last week as pa

Litzy had a blast at the Wilsonville Community Blo

Christine, one of our Neighborhood Trees Specialis

What's up with this California live oak?! 🌲 “

Friends of Trees is excited to be growing our Gree

Remember to give your trees some extra love to hel

Huge thanks to all of our summer inspectors for ch

On a break from a productive strategic planning se

Every summer Friends of Trees partners with @nwyou

Volunteering to plant trees is a healthy and empow

Get your bike ready! Next Wednesday July 13th, Fri