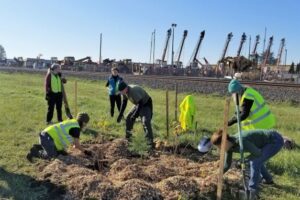 Two Decades of Planting along the Northwest Expressway

Every season, the Eugene Branch kicks off its planting season along the Northwest Expressway, a five-mile stretch of road parallel to the railroad. It’s not the most glamorous of planting sites, but there is plenty of available space for large trees to grow and provide their benefits to the community.

Friends of Trees volunteers will gather in Eugene on November 5th for Phase 9 of this planting project. The land is owned by Lane County and abuts the Union Pacific railyard. Friends of Trees picked this annual planting project up in 2013, but it actually started back around 2000, with what we now call Phase Zero, planted by the Eugene Tree Foundation (which became Friends of Trees – Eugene). That first planting has grown into sizable shade trees, and has served as the site of a condoned homeless camp for veterans in Eugene.

“Those trees are now providing shade to people,” says Eugene Director Erik Burke. “It goes to show that trees can still have benefits when they’re planted in places besides private property.” 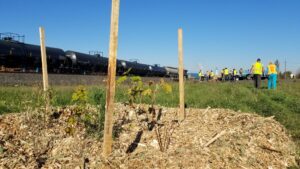 For these Northwest Expressway plantings, the Eugene team is creating pods of plants. After removing a eight-foot diameter of grass, they’ll plant one-to-four trees and four-to-six shrubs. In addition, this year they’ve added camas bulbs to the recipe, and will also be adding native milkweed and Douglas’ aster.

Installing understory layers in addition to trees is an approach that the Eugene team hopes to expand on for all their plantings. This year, they’re offering camas bulbs as an add-on for neighborhood tree recipients.

“We really want to be creating habitat for native pollinators,” Erik says. “So we’ve got 900 camas bulbs to plant this season.”

“We started planting at the southern end of the expressway, then moved to the north, and now we’re filling in the middle,” says Eugene-Springfield Program Manager Taylor Glass. “We’re required to space these pods out a bit, but that means we have plenty of space to plant trees that will grow to be quite big.” 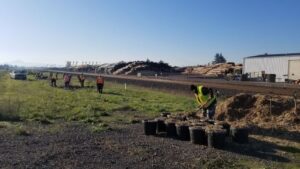 The next time you’re driving on Northwest Expressway, keep your eye out for incense cedars, Pacific madrones, valley ponderosas, giant sequoias, and California laurels. What used to be an empty stretch of grass is on its way toward being a happy home for trees.

Our Favorite Trees to Watch in Winter Many trees have shed their leaves and are on their way to being dormant for the winter. But not all of