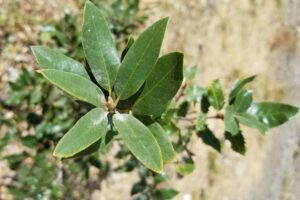 Some climate trees can need a little extra TLC

We pay extra attention to all of our trees during their first few years of establishment. Watering, mulching, pruning, inspection, restaking, vandalism repair —this little bit of extra work has a huge impact on the tree’s success in the long run. Over the last decade, the Eugene Branch has been integrating more climate resilient trees into its planting regimen. They’ve found that these trees need a bit more attention, but because these trees will stand up to the changing climate, it’s definitely worth it.

Because these trees are not widely used in the nursery trade, they have not been selected for form in the same way. One guideline of climate change is that by 2050, each area’s climate will become like that of the area 500-700 miles south of them, so many of the trees we are trying are native to the area south of Eugene. Because of how they’ve been selected, more common trees in the nursery trade are more uniform—they tend to have trunks that go straight up and branches that are well-spaced.

Many common trees are cultivars, often patented clones. Of course, these trees still require some pruning, but they have had years of effort to select for form, so they are as predictable as a fast food burger. This process diminishes intraspecific diversity, or the diversity within a species, something that is just as valuable as interspecific diversity, the diversity between multiple species.

Some of the climate resilient trees the Eugene team are working on—like valley oak, blue oak, and California live oaks—often exhibit rapid, explosive growth, sometimes taking on a “rangy” or “shrubby” appearance. During their first three years of growing, they need more pruning and staking attention to achieve a good form. 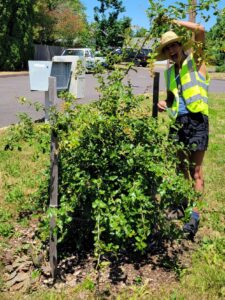 “These climate trees need about twice as much pruning as a typical tree during their establishment years,” says Eugene Director Erik Burke. “But they are very drought tolerant and tough, and that gives them a leg up in the face of the changing climate.”

The Eugene Branch is about to start its yearly pruning. One reason that Eugene prunes in late summer, rather than in the dormant season, is that it slows the trees down.

“Here, fast growth is a bigger issue than slow growth,” Erik says. Fast growing trees are tougher to manage for strength and stability, and will often have weaker wood more prone to failure, particularly in snow or ice storms, which is something you don’t want in the urban environment.

It’s because our trees are in the urban environment that it’s so important to prune them to have a central leader and stong structure. A tree in the forest or a field will prune itself. But in the urban environment, we want to prune trees before a truck does, which could seriously damage the tree, or before a storm does, which would pose a threat to people and property.

The benefits of any one tree grow exponentially with every year it’s alive. We want our trees to have long, healthy lives so they can provide shade, clean air, and habitat.

“Climate resilient trees are only becoming more and more important, so we think they are worth that bit of extra effort,” Erik says.

END_OF_DOCUMENT_TOKEN_TO_BE_REPLACED

Planting Trees at Charlemagne Elementary School When you think of an elementary school campus, you probably think of sports fields and

END_OF_DOCUMENT_TOKEN_TO_BE_REPLACED

Sourcing Trees for a Changing Eugene

What trees should we be planting in a changing climate? That question has been top of mind for the Friends of Trees Eugene Branch for a long

END_OF_DOCUMENT_TOKEN_TO_BE_REPLACED

What's up with this California live oak?! 🌲 “

Friends of Trees is excited to be growing our Gree

Remember to give your trees some extra love to hel

Huge thanks to all of our summer inspectors for ch

On a break from a productive strategic planning se

Every summer Friends of Trees partners with @nwyou

Volunteering to plant trees is a healthy and empow

Get your bike ready! Next Wednesday July 13th, Fri

“Getting outside, away from the classroom, I got

Trees are in their full summer glory! It's a great

Heat Week kicked off on Sunday, the hottest day so

It's going to get hot this weekend! When the tempe

Last year, 96 Oregonians lost their lives to the H

We had such a blast at #portlandpride this weekend

How many Friends of Trees staff to prune one tree?

Just a lovely reminder that trees are habitat! We

This week, our staff gathered at Willamette Missio

LAST CHANCE FOR TREES (until Autumn)! We've got a

TREES FOR SALE: The planting window is almost clos

Our friends at @chaliceoregon are raising funds fo